Cork Chamber has tonight recognised Cathy Kearney, Apple VP of Operations for Europe, Middle East, India & Africa for her outstanding contribution to business. The award, now in its 12th year, was presented at the Cork Chamber Dublin Dinner. Attended by 600 leading political and business people in the Clayton Hotel Burlington Road, the dinner was sponsored by EY.

Ms Kearney has been recognised for her exemplary career at Apple. Cork has been home to Apple for over 40 years and it serves as Apple’s European Headquarters. Ms Kearney has been instrumental in the company’s growth and impact with the local community. The largest private employer in Cork, with over 6,000 people, this year saw Apple announce a new Engineering & Test facility and plans to further expand its campus. Under Ms Kearney’s leadership, Apple has built deep relationships with community organisations across Cork, and continues to grow on its work with local schools, universities and charitable organisations. Since 2015, Apple and its employees have supported more than 400 registered charities across Ireland, as part of its giving program.

“A wonderful and worthy recipient of the Outstanding Contribution to Business Award for 2022, Cathy has made an impressive impact during her time in Apple. Known for championing Cork as a great place to live and work, Cathy’s passion for education has also led to the creation of important links with local schools and universities. Cathy’s strategic focus, determination, and leadership make her a remarkable contributor to our regional economy and business environment,” said Ronan Murray, President of Cork Chamber of the announcement.
Joining Apple in 1989, Ms Kearney undertook various finance roles before taking over leadership of the Cork site and EMEIA Operations in 2004. The following two decades saw many significant milestones for Apple, with the launch its iconic iPhone, iPad and Apple Watch. Throughout this time, Apple has continuously invested in Cork, adding new areas of expertise and cementing the importance of Cork within the global operations of the company. Alongside this, during Ms Kearney’s leadership, Apple has welcomed highly-skilled employees from around the world, epitomising the company’s culture of inclusion and diversity and adding to the fabric of Cork.
“It is without doubt that Cathy has nurtured Apple’s commitment to Cork and Ireland, and has been instrumental in Apple’s continued investment in our region. The recent plans for expansion of the Cork campus are an exciting chapter in the story of Apple’s 40+ years in Cork. Not just a key employer in the region, Apple is an important part of our tech industry supporting 30,000 jobs in Ireland. Congratulations to Cathy, it is a great honour to recognise her outstanding contribution to business with this award,” commented Conor Healy, CEO of Cork Chamber.

Cathy Kearney, Apple VP of Operations for Europe, Middle East, India & Africa said upon receiving the award: “I am delighted to receive this tremendous honour from the Cork Chamber of Commerce, which I am accepting on behalf of the whole Apple team in Cork. Everyday I am inspired to work with such talented and passionate individuals, who live Apple’s values in everything they do. Cork has been Apple’s home for over 40 years and helped Apple become the company it is today. We are proud to be part of such a vibrant and diverse community, and look forward to continuing to contribute to Cork. Thank you to Cork Chamber and everyone involved.” 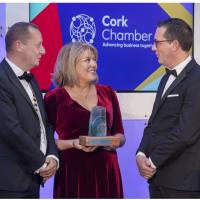