Cork to be European Green Capital by 2025, Chamber President Proposes

Held in Cork City Hall, the black-tie event was attended by over 1,000 leading business and political representatives.  Phillip King, curator, musician and film director, was keynote speaker at the event.

Setting a target of European Capital by 2025, Paula Cogan, President of the Chamber said:
“In 2025 Cork should celebrate the honour of being the European Green Capital. Joining the ranks of Stockholm, Bristol, Copenhagen, Hamburg, Essen, Oslo and Lahti. I set a goal so that we may measure success. I call on all stakeholders, the City and County, the next Government, the NTA, TII and our members to back this objective forcefully and with urgency. The award is not an end goal. It is a means of measuring first steps. For Cork to differentiate, for it to be internationally competitive, nothing short of excellence will suffice.”

Challenging the delivery of sustainable infrastructure projects needed for Ireland to retain its competitiveness, Ms. Cogan added:
“The race is competitive, but are we training like amateurs? Timelines come and go. Our neighbours become the global leaders in offshore wind while our powerplants creak. We talk about public transport but build no bus lanes. We set density targets, but we don’t enhance construction viability. Cork slowly begins to sprawl. If we want to stop playing like amateurs we need to stop acting like amateurs. Let’s put it simply: If over the lifespan of the next national Government and current local Government, we do not comprehensively deliver cycle and bus infrastructure, we have lost.”

“Between us all, we have the power to be the change. To be part of the climate action. To drive action and to demand that action. There can be no downside to confidently pursuing a better quality of life for our City region.”

“Tomorrow we go the polls and in time we will have a new Government. Their every move will be judged. Ireland must win. And a successful, progressive, and sustainable Cork is the metric that will define us”, the Chamber President concluded. 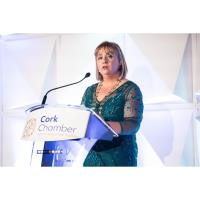