Infrastructure Must be Delivered, We must be Powered by Renewable Energy, We Must Be Genuinely Inclu

Addressing the assembled members in the Imperial Hotel, Chamber President Paula Cogan said;
“Over the past 18 months Government has delivered the appropriate supports and business has risen to the challenge. But we are now in a position where if pandemic related progress holds true, an earnest conversation can be had about moving beyond supports. But there must remain an outstretched arm, should any sector falter, or any support rollback be deemed too abrupt. We will monitor progress closely, staying resolutely by the side of business.”

“But now, Ireland must move beyond survival. Ireland must have a vision and deliver if it is to have credibility among its people, the international community and investors. There is now a National Development Plan which paints a picture of capital spend allocations for the next 10 years and there is no reason to think that any project aligned to Government policy won’t be funded if it can get to final investment decision.”

“Delivery of infrastructure is now the challenge but it is beset by delays in objection in planning and in the courts. Objections can take years to resolve for no reason other than poor resources and lack of binding timelines. What credible State allows it’s own nationally significant infrastructure projects to languish in this manner? It undermines the institutions, the economy, the environment, and the vision.”

Speaking of the challenge of energy shortages Paula said, “It is utterly negligent to be lamenting energy insecurity and climate change when we have the potent solution of floating offshore wind and green hydrogen in our hands. In this context of inertia, business will not be resigned to a future of carbon tax rises, or accept any excuse for energy insecurity. Targets must be increased and RESS expanded and the transmission infrastructure for hydrogen and electricity must be resourced and enabled.”

Speaking of a diverse and welcoming environment Paula said, “In consideration of talent we must think global and local and be inclusive in doing so. Whatever we tell ourselves about social progress made in recent years it is a fact that not all are treated equally or have the same access to opportunity. More must by done to bring legislation such as the Hate Crime Bill through the Oireachtas at speed, and to knock down barriers to success such as social capital by better integrating the opportunities presented by business with those who are in a position of disadvantage.”

In conclusion, Chamber President Paula Cogan said, “I believe that Ireland can sustain a stable and creative world leading economy, and that Cork can be a globally compelling City region, if we stay sharp in relation to the pandemic, actually deliver on our existing infrastructure commitments, step up to our rightful place on renewables and walk the walk as a welcoming society of equals.

At the 202nd Cork Chamber AGM Paula Cogan thanked Eoin Motherway, Hugh Smiddy and Mark Fitzharris for their service on the Board. Paula Cogan was re-elected as President of Cork Chamber and Clair Murphy, Pfizer, Ray Kelleher, The Montenotte and Captain Brian FitzGerald, Simply Blue Group were formally elected as members of the Board. 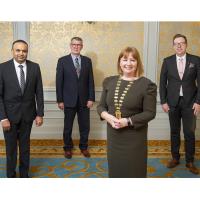