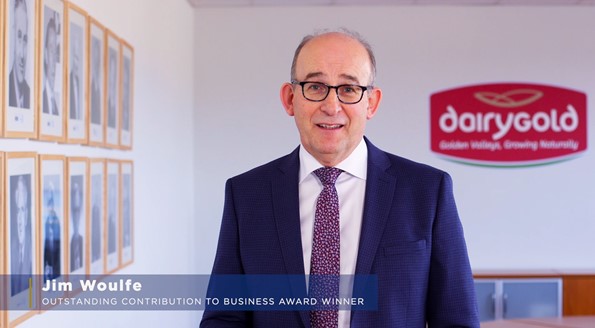 Jim Woulfe, has been honoured with the Cork Chamber ‘Outstanding Contribution to Business Award’ recognising a lifelong career in the agri-food industry along with other notable achievements. The native of Limerick has worked for Dairygold for over 40 years, alongside his contributions to other business, state and educational institutions through his board representation.

Paula Cogan, President of Cork Chamber said of the announcement, “It is an honour to announce that Jim Woulfe is the recipient of the Outstanding Contribution to Business Award. Jim has devoted his career to Ireland’s leading indigenous sector, which has seen unprecedented change. He has gone above and beyond to ensure the livelihood of those working in the sector. He embodies a passion for the support and growth of Ireland and sits on numerous boards including CIT,(now MTU), Cork Airport, the NCPC, Ornua (the Irish Dairy Board) and Fota Wildlife Park. His individual commitment has supported collective vision, and Jim’s contribution is nothing short of outstanding.”

An Taoiseach Micheál Martin TD shared a message of congratulations with Mr Woulfe saying “I am delighted to congratulate Jim Woulfe on the great achievement of winning the Cork Chamber Outstanding Contribution to Business Award. This award looks to acknowledge the hard work, effort and sacrifices that it takes to succeed. Jim is a richly deserving recipient of the award, recognising as it does, his extraordinary contribution over many years to Cork and the broader region, and his great achievements in leading Dairygold to ever greater success. This award has had many esteemed winners and Jim is truly worthy to ne joining such company.”

Simon Coveney TD, Minister of Foreign Affairs and Minister for Defence extended his congratulations with Mr Woulfe, acknowledging his contribution to enterprise and development over four decades: “This award recognises Jim’s tireless commitment to enterprise and development in Cork for over four decades, for his role in Dairygold along with his many other endeavours including in Fota Wildlife Park and Munster Technological University, to name but two. Jim’s professionalism, enthusiasm and drive never waned and we can now see the impact of his work over the last four decades and cross the southwest region as a whole. I wish Jim the very best in his retirement and extend my congratulations for a hugely significant achievement.”

Upon receiving the award, Jim Woulfe, said “It is a great honour to accept this very special award from the Cork Chamber and EY. To be honoured by two business organisations that I hold in such high esteem makes it even more special. Thank you to Cork Chamber and EY who have always been excellent business supports to Dairygold.”

“I am a great believer in the power of “team effort”, it’s something I learned in sport many years ago and I believe it’s equally as effective in business. I have been very fortunate to lead a superb team combined with a tremendously committed wider Stakeholder Group at Dairygold for the last 12 years. Everything that’s been achieved is thanks to that combined team effort.”

John Higgins, Lead Partner, EY Cork, commented on the award announcement saying, “I would like to congratulate Jim Woulfe, a most deserving recipient of this prestigious award. Over his 42 years with Dairygold, Jim has been a stalwarth in the dairy and agriculture industry, leading the organisation through times of significant change and growth whilst fostering a hub of employment from North Cork. EY is proud of our continued support of Cork Chamber's Outstanding Contribution to Business Award throughout these times of uncertainty. It is more important than ever to recognise those who contribute so richly to business and community."

Video: View video HERE featuring Mr Woulfe on accepting the award from Cork Chamber along with messages of congratulations from An Taoiseach Micheál Martin TD and Minister Simon Coveney TD. 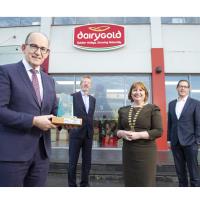