New York is by far the most in-demand new direct destination from Cork Airport, according to a new survey conducted by Cork Chamber, the voice of business in Cork.

The survey of Cork Chamber members, developed in cooperation with Cork Airport, asked businesses about their current travel patterns and future route preferences.

The survey findings show that Cork Chamber members depend greatly on Cork Airport for conducting their daily business activities. Over 86% of businesses reported that direct air access to Cork Airport is key for overseas colleagues travelling to Cork offices.

With the Americas by far the most important long-haul destination (75%) for Cork businesses, a direct service to New York is decidedly the most in demand for future connectivity.

London Heathrow comes out as the top European hub airport with 65% of respondents ranking it number one, and the UK as the top business destination, followed by Amsterdam Schiphol. Paris Charles de Gaulle was ranked as the third most preferred European hub for direct connectivity and onward travel, with a direct seasonal service resuming in March and running through the summer months, there is clear indication of demand for a year-round service.

Commenting on the findings, Conor Healy, CEO of Cork Chamber said: “The results of this survey are undeniable. International connectivity is of critical importance to business activity in Cork, including to the FDI sector, indigenous enterprise, and tourism. While this has been recognised with the introduction of several new routes last year, further routes to key business locations will be required to support continued economic growth in the Cork region.

As the airport continues to recover, the state must continue to support the development of increased capacity through investment and by including Cork Airport formally in the Government’s upcoming new Regional Airports Programme. This funding is vital not only to support the growth of the airport but also for the Cork region.”

With the removal of pandemic restrictions, Cork Airport witnessed a strong recovery in 2022, having served 2.24 million passengers representing an 86% recovery from 2019 and 768% from 2021 levels.

Niall MacCarthy, Managing Director at Cork Airport said: “Cork Airport greatly values the partnership with Cork Chamber and respects the input which Cork Chamber members provide us with regard to business demand. We are very pleased with the recovery to date which will see 48 scheduled routes operating from Cork Airport, served by 8 scheduled airlines and we expect to welcome over 2.4 million passengers in 2023.

Transatlantic flights from Cork are a priority to restore since the cessation of the previous Norwegian service to East Coast USA and we will utilise these survey results to enhance our own research in our discussion with airlines for future route development.

The strong support of the stakeholder community has proven invaluable in the recovery of traffic at Cork Airport, and we will continue to engage with our stakeholders to grow routes, airline choice and develop the passenger journey.”

In closing Mr. Healy commented, “Cork Airport is an important asset in our region and plays a central role in attracting further investment and economic growth opportunities. We will continue to work with Cork Airport, DAA and airlines to facilitate these routes that will enhance the profile of the south-west region and international business ties.” 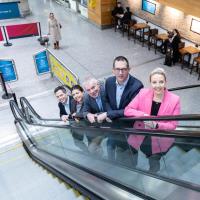