Commenting on the announcement that Ryanair intends to add a third aircraft as well as seven new routes at Cork Airport, Conor Healy, CEO of Cork Chamber said:

“This morning’s announcement by Ryanair will enable Cork Airport to return to the growth path it was experiencing prior to the pandemic, when passenger numbers were reaching record highs at Ireland’s fastest growing airport.

“It is vital that Cork Airport is in a position to service the pent-up demand for air travel that has emerged since the easing of restrictions. Today’s announcement will not only allow Cork Airport to continue its success story, but it will also benefit many other sectors particularly those dependent on inbound tourism.”

“This investment by Ryanair will result in job creation both directly and indirectly and has allowed the airport to revise upwards its passenger forecasts for 2022 to more than two million passengers. The restoration of this vital connectivity is also a boost for the hospitality sector in Cork and in the wider Munster region. Government supports to date have been crucial to Cork Airport’s recovery, and must be continued to ensure that the airport remains competitive to support Irish tourism and connectivity”.
-ENDS- 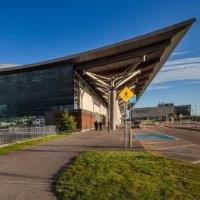