Volvo Cork Week has been officially launched by Simon Coveney T.D., Minister for Foreign Affairs & Minister for Defence, and the Mayor of the County of Cork, Cllr. Gillian Coughlan.  The legendary world-renowned regatta returns to the Royal Cork Yacht Club in Crosshaven from 11th-15th July 2022.

At the launch in the title sponsor Johnson & Perrott’s Volvo Showroom in Bishopstown, Cork, Volvo Cork Week co-chairs Annamarie Fegan (the first female vice admiral in the clubs 302 year history) and Ross Deasy met with key event partners and revealed details of the much-anticipated sailing festival’s return.
Among those in attendance were David Thomas, Managing Director of Volvo Car Ireland, Mark Whitaker, Chief Executive of Johnson and Perrott Motor Group and Conor Mowlds, Chief Commercial Officer of Port of Cork Company Ltd, which has been an event partner for over 30 years.

Volvo Cork Week will also incorporate four championship events - the 1720 European Championships which will include over 40 1720 boats that were designed in Cork, the Irish Cruiser Racing Association (ICRA) National Championships, the Dragons South Coast Championships, and the SB20 Nationals– in addition to the renowned Beaufort Cup for international uniformed service personnel, which encompasses a race around the Fastnet Rock and back to Cork.

Racing within the harbour will take place from Monday 11th to Friday 15th July and recommended viewing points include Camden and the Church Bay in Crosshaven, the new Haulbowline Island Amenity Park, Ringaskddy as well as the promenade in Cobh.
A new addition for Volvo Cork Week 2022 is a dedicated Classic Yacht Regatta, which will be hosted by the club for the very first time this year.  Classic yachts from around the world will sail to Cork to partake in three days of racing in and outside Cork Harbour, including the famous 37-foot classic yacht Persephone, the 1919 classic Erin, and the 1957 luxury yacht Shamrock, which will provide a fantastic viewing spectacle for shoreline onlookers.  Over 20 classic French boats will also arrive as part of the Bastille Day celebrations.

In addition to top quality racing, the event has become just as known for its off-the-water activities over the years. This year, Volvo Cork Week will kick off with a fun-filled Family Day on Sunday July 10th from 12-5pm.  There will be fun and adventure for families across whole village of Crosshaven from the Royal Cork Yacht Club to Camden Fort Meagher and everywhere in between, including the famous Pipers Fun Fair and boat trips from Hugh Coveney Pier on the Cailin Or.  The emphasis this year is on sustainability with coastal walks, competitions, games as well as a new costal market in the Marquee at the Yacht Club.  A children’s workshop with Marine Scientist and Volvo Car Ireland Brand Ambassador Finn van der Aar will also take place at the Royal Cork on the day.

There will also be a Volvo Cork Week Ladies’ Day charity lunch in aid of the Crosshaven RNLI on Wednesday July 13th, with Volvo brand ambassadors Amy Huberman and Brendan Courtney, which is a total sell out.

The popular biennial sailing regatta, which has been in existence since 1978, holds a special significance this year as the Royal Cork will take the opportunity to mark its postponed tricentenary celebrations with international visitors, two years on.  Hundreds of boats and thousands of sailors and global visitors, who were planning to attend in 2020, have already rescheduled their plans to join the oldest yacht club in world in their celebrations this year, which will impact tourism in the Cork region and along the Wild Atlantic Way over the week.

There will also be an opportunity to see Ireland young sailing Olympic hopefuls in action as four sailors from Team Ireland will participate in the races, including the Royal Cork’s very own Séafra Guilfoyle and Johnny Durcan.

The biennial regatta draws spectators from far and near and the atmosphere in Crosshaven, home of the Royal Cork Yacht Club, is always second to none both during and ahead of the biennial Volvo Cork Week.  The harbour villages of Cork are also buzzing with activity and offer the perfect vantage points to see the stunning spectacles on the water.

Minister Simon Coveney T.D., a keen Volvo Cork Week competitor himself, who plans to take part in the Beaufort Cup, said, “It is a pleasure to officially launch Volvo Cork Week, which will make a welcome return this summer. Events like this that attract visitors from around the world are very important for Ireland, as they are an opportunity to showcase our beautiful marine resource, particularly here in Cork Harbour, the second biggest natural harbour in the world.  The Royal Cork Yacht Club is the oldest sailing club in the world - it all began here –and is a huge part of Cork harbour’s history that we are all very proud of.”

Kieran O’ Connell who was elected this year as 43rd Admiral of the Royal Cork Yacht Club said, “It is my great honour to welcome sailors from around the world back to the stunning Cork Harbour and the most historic yacht club in the world, this summer, after a 4-year absence. It’s going to be an exceptional week of sailing, we have a fantastic family day planned for everyone in Cork to enjoy, and I’m delighted that four of our own Irish Olympic hopefuls will be participating. We have a packed schedule on and off the water”.

David Thomas, MD of Volvo Car Ireland, said, “We are delighted to continue our title sponsorship of Volvo Cork Week, an event that matches our brand’s commitment to being sustainable, safe and personal.  The Volvo brand is synonymous with sailing across the world and we believe in the importance of supporting, and partnering, with sports and communities where our customers live, work, and play.” 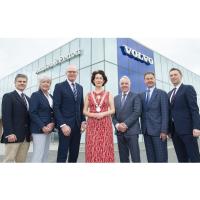