Marja Gaynor is a member of the Irish Baroque Orchestra and Camerata Kilkenny. Both ensembles have released much-acclaimed recordings and toured nationally and internationally. She is a founder member of Giordani Quartet, Ireland’s only chamber group specialising in early Classical repertoire using period instruments. With her various areas of interest and expertise (Baroque, traditional music, and improvisation) Marja is much sought after as an arranger, studio musician and collaborator in all genres. Her proudest project to date was her critically acclaimed arrangement of Purcell’s ‘Dido and Aeneas’ (Cork Opera House), and she also arranged and played the strings of ‘Falling Slowly’ from the movie Once, which won the Oscar for best song in 2008.

“David Power is a born collaborator. His incisive, fluid piping style has seen him work with a wide range of musicians and composers” (The Irish Times)

John Walsh is Ireland’s leading Flamenco Guitarist. An accomplished musician and composer, John has been performing solo since 2006. He was one of ten musicians (and the only guitarist) chosen for the 2009 ‘Musicians of the Future’ concert in the National Concert Hall, Dublin, performing two of his original compositions. In 2015 he was invited to play at the second International Paco de Lucia Guitar festival in Algeciras, a major flamenco festival. John has composed music for and performed with the National Ballet of Ireland, Bill Whelan’s Riverdance and Michael Rooney’s De Cuellar Orchestra and performed for President of Ireland / Uachtarán na hÉireann Michael D. Higgins. He recently released his debut solo album Irlandalucia to critical acclaim.

“….a very beautiful and haunting composition which manages to convey both lyrical freedom and grace…It’s really superb stuff” (Lyric FM) 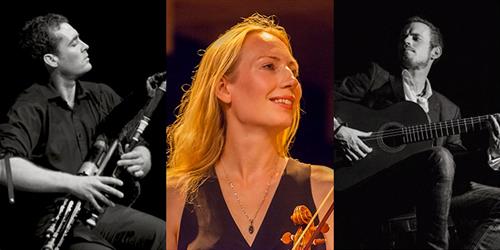 Tickets €10 and can be booked by registering HERE