Beethoven Reflected I: The Ficino Quartet 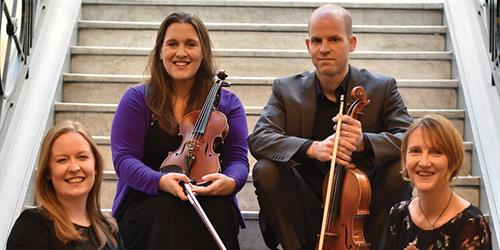 Curated by Ergodos, the first concert is centred upon Ficino Ensemble’s thoughtful and impassioned performance of Beethoven’s fifteenth string quartet (1825) with its famous “Holy song of thanksgiving” that opens the third movement. The first four movements of this breath-taking masterwork are preceded by specially commissioned works by Amanda Feery, Garrett Sholdice, Cora Venus Lunny and Benedict Schlepper-Connolly.

A new, seamless whole is formed. The new works sit out of time, resonating in sympathy with the Beethoven quartet; refracting and reflecting its light; suggesting a multiplicity of connections, both internal and external.

Amanda Feery’s new piece opens the concert, tracing over faint grainy remnants of the Beethoven quartet – an archaeology of sound, emotion and meaning.

“The Secret Cause”, Garrett Sholdice’s interlude between first and second movements, meditates on Beethoven’s “Heiligenstadt Testament”, written some two decades prior to the fifteenth quartet, in which the composer expresses despair at his growing deafness, his growing isolation.

Cora Venus Lunny’s new piece, “Theft”, precedes the third movement and its famous opening “Heiliger Dankgesang” hymn. “I wanted to go to some deep and even unpleasant places,” she says, “in order to appreciate the light of Beethoven’s gloriousness even more and be lifted up.”

In “Foreign Hand”, Benedict Schlepper-Connolly gently sustains the rich sonorities of the third movement – an extended moment of repose before the final tour-de-force of the fourth and fifth movements.

Garrett Sholdice
The Secret Cause †

Amanda Feery is a composer working with acoustic, electronic and improvised music. She has written for orchestral, chamber and vocal ensembles, theatre, kinetic sculpture, and multimedia. Past collaborators include the RTE´ National Symphony Orchestra, Chamber Choir Ireland, Alarm Will Sound, Third Coast Percussion, Crash Ensemble, Ensemble Mise-en, RTE´ ConTempo Quartet, Gallicantus, Michelle O’Rourke, and Paul Roe.Recent projects include This is the House of with Alarm Will Sound, exploring the discord between the church as an architectural space and an institution of abuse; Give Us The Night with Third Coast Percussion, an ode to Dublin’s rapidly disappearing clubs and night spaces; and Stray Sods, with cellist Amanda Gookin’s Forward Music Project, a project commissioning multimedia works that encourage social change and empowerment for womxn. Future projects include a new work for Chamber Choir Ireland, music for Tadhg O’Sullivan’s upcoming film, To the Moon, and an operatic work for First Fortnight Festival with Irish National Opera. amanda-feery.com

Garrett Sholdice is an Irish composer living and working in Dublin. His music has been described as possessing an “exquisite delicacy” (The Irish Times). His music has been recorded by pianist Michael McHale, Maya Homburger & Barry Guy duo, Ergodos Musicians, and Trio Scordatura. Notable recent works include: The Root and the Crown, a twenty-minute work for ensemble, commissioned by Crash Ensemble; Eighteen Cadences for basset clarinettist Jonathan Sage and the Keats Quartet; Gymel for viola and cello, commissioned by London concert series “840”; and Winter, the title track from the debut album by Irish classical chamber group, Ficino Ensemble. Sholdice is a co-director of Ergodos (ergodos.ie), a Dublin-based record label that he founded with Benedict Schlepper-Connolly in 2006. Based in the UK, and then between Dublin and Berlin for much of the last decade, Sholdice has been fully based in Dublin since 2016. He has lectured at Trinity College, Dublin City University, and Pulse College. garrettsholdice.ie

A violinist since early childhood, who worked around the world as a soloist and chamber musician before specialising in contemporary music, Cora Venus Lunny has been exploring improvisation and composition for many years. After releasing 1943, a self-produced EP of covers and originals, Cora’s second album, Terminus Conscientiae, part of Diatribe’s Solo Series, was a spontaneously composed response to Bartók’s Sonata for Solo Violin. The Journal of Music described the album as “as much an exercise in textures and transposition as it is a display of safety-net-free high-wire virtuosity”, while allaboutjazz.com wrote “Fans of Bartók, contemporary string adventures and improvised music will find much to appreciate in Lunny’s highly personal, soul-searching endeavour”. As a member of Yurodny, Cora has also written for them. In 2016 Cora and Kate Ellis were commissioned to co-compose music for Common Ground, relating to the 1916 commemorations. Cora’s latest music can be found at bandcamp.com/trancebranches and patreon.com/trancebranches.

Benedict Schlepper-Connolly is a composer and producer from Dublin. As a composer, he moves between various musical forms, including chamber music, choral writing, orchestral work, arrangement, songwriting, field recording and music for dance and film. Benedict’s compositions frequently seek out an ecstatic quality, with a reduced palette of materials, rich tonal harmonies and rhythmic intricacy. In recent years Benedict has worked with a range of orchestras and groups such as the RTE´ National Symphony Orchestra, Ensemble Klang, Crash Ensemble and Slagwerk den Haag. Recurring collaborations with performers such as vocalist Michelle O’Rourke, pianist Michael McHale and cellist Kate Ellis, feature prominently in his output. He has worked with musicians from across a wide musical spectrum, including Iarla O´ Liona´ird, Thomas Bartlett (aka Doveman) and Sam Amidon. Along with Garrett Sholdice, Benedict runs Ergodos, a record label and production company founded in 2006. His debut solo album, The weathered stone, was released on the Ergodos label in 2016. schlepperconnolly.com

Ludwig van Beethoven (1770-1827) was a German composer and pianist. His early achievements, as composer and performer, show him to be extending the Viennese Classical tradition that he had inherited from Mozart and Haydn. As personal affliction – deafness, and the inability to enter into happy personal relationships – loomed larger, he began to compose in an increasingly individual musical style, and at the end of his life he wrote his most sublime and profound works. From his success at combining tradition and exploration and personal expression, he came to be regarded as the dominant musical figure of the 19th century, and scarcely any significant composer since his time has escaped his influence or failed to acknowledge it. For the respect his works have commanded of musicians, and the popularity they have enjoyed among wider audiences, he is probably the most admired composer in the history of Western music. (Grove Music Online)

Formed in 2013, TheFicino Ensemble have been committed to exploring the vast chamber music repertoire and presenting thoughtfully programmed concerts. The group regularly perform as a string quartet, and the addition of winds and percussion gives the possibility of playing large-scale chamber works. The members share a dedicated approach to contemporary music and have been invited to play as part of Moving on Music in Belfast, where they performed works by John Buckley, Anselm McDonnell and Ian Wilson. In 2019 they collaborated with several composers of the Irish Composers Collective, where the musicians worked on pieces with the composers and premiered several new works for flute, harp and viola. Ficino Ensemble was recently joined by the Con Tempo String Quartet in a performance of works by Brahms, Mendelssohn and Enescu as part of the Dublin Enescu Festival. In 2018 they performed a concert with Olwen Fouéré as part of MusicTown in Dublin, which included a performance of Thomas Ades’ Four Quarters and Ludwig van Beethoven’s String Quartet Op. 132. Their debut recording Winter, released on the Ergodos record label, has received critical acclaim and has put them at the forefront of the Irish chamber music scene. Ficino Ensemble takes the name from Marsilio Ficino, the Renaissance philosopher who regarded music as a “contemplation of the divine”. ficinoensemble.com

Ergodos is a record label and production company based in Dublin, founded by composers Benedict Schlepper-Connolly and Garrett Sholdice in 2006. Radically eclectic in their outlook, Schlepper-Connolly and Sholdice believe in presenting beautiful, enriching music to the broadest audience. Ergodos has released over two dozen titles, ranging from curated projects inspired by J.S. Bach and the art of song with house band Ergodos Musicians, to solo piano meditations by Simon O’Connor, to the delicate ambient jazz of Seán Mac Erlaine, to portraits of acclaimed contemporary composers such as Christopher Fox and Kevin Volans, to traditional Irish music projects featuring fiddle player Frankie Gavin, and much else. Ergodos has produced numerous concerts and festivals in Dublin, Amsterdam, Berlin, London and New York. Since 2014, Ergodos has curated and produced the Santa Rita Concerts, a series of music and wine evenings in the Little Museum of Dublin. Previous concerts have featured artists as diverse as British folk singer Chris Wood, Egyptian composer-vocalist Nadah El Shazly, sound artist Chris Watson, and Estonian contemporary folk musician Maarja Nuut. ergodos.ie

This site uses cookies. By continuing to browse the site, you are agreeing to our use of cookies.