Join Cat Dowling online from Triskel on Friday 28 May at 8pm, along with Gerry Horan and Marje Gaynor. Tickets €10 per household on sale Thursday 6 May at 10am.

Cat Dowling writes beautifully dark pop songs. Her voice has been lauded as one of the most wonderful and evocative in Irish contemporary music.
Her husky and achingly intimate vocals will draw you in from the outset. The acclaimed Irish singer, songwriter and performer previously fronted Babelfish and Alphastates. Dowling grew up in a conventional household though music was always playing and she was exposed to the Kinks, ACDC, The Rolling Stones, The Jam and the Beatles from an early age. She learnt piano as a child, performed in school musicals and choir groups throughout her youth, and began teaching herself to play guitar and write poetry as a teenager. “I became addicted to the freedom singing gave me” she says. “When I sang as a kid, my mind felt empty, a voice came from nowhere and people always stopped and listened up.”

Dowling went to University in Dublin and became very disillusioned soon after. “I finished the degree to keep people happy but I had no interest in it – in fact I hated it”.
She left Ireland for Spain; as a fluent French and Spanish speaker life was easy for her there. “I drifted for a few years,” Cat recalls. “I had a hankering for a life in music, but brushed it aside thinking that kind of thing was only for dreamers.”

On returning to Ireland, she started to follow the dream. She began to inveigle her way into venues, gigs and bands, and slowly, she admits, “became addicted to the peace and freedom singing gave me. Music felt like a lover that I had to satisfy – even though I did other things to make ends meet, it kept gnawing at me to come back to it.”

Dowling has played and fronted numerous music projects, the most recent act was Babelfish, which quickly morphed into the most successful electro/dream-pop band, Alphastates. The latter released two critically praised albums – Made From Sand (2004) and Human Nature (2009) – before splitting up in 2010 as Dowling had the need to record an album following her own lead. “I feel very grateful to be where I am now and I’m really excited about the album I’ve made and the music I’m writing now.

Gerry Horan is a composer, producer, and multi-instrumentalist whose career in music spans twenty years. His work includes acclaimed films & series such as Losing Alaska, The Liberties, The Fisherman and Shooting The Darkness. He was a founding member of the bands Alphastates and The Violet Roadkills, and remains a close collaborator with renowned singer/songwriter Cat Dowling.

Originally from Finland, Marja Gaynor is a Cork-based violinist and viola player. She specialises in Baroque music and plays with various Irish and European ensembles, including the Irish Baroque Orchestra and Camerata Kilkenny, but is also known as a versatile musician at home in many different styles, a fluent improviser, as well as arranger and curator. She has performed and recorded with various Irish bands and artists including Interference, Adrian Crowley, Paul Tiernan and her own world music band The Polskadots. Gaynor also arranged and played the strings for Glen Hansard and Marketa Irglova’s Oscar winning song “Falling Slowly”. 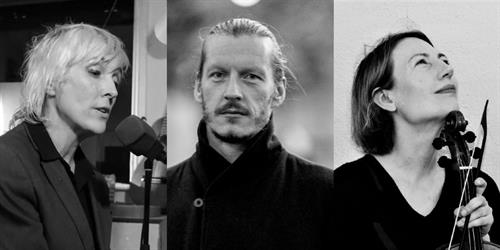